The C-QUR was cleared by the FDA 510(k) in March 2006. In April 2008, C-QUR Lite Mesh V-Patch, for pre-peritoneal repairs, and C-QUR Edge Mesh V-Patch, for intra-abdominal placement, were released. In June 2009, C-QUR V-Patch Mesh was released for small hernia defects. In January 2010, C-QUR OVT Mesh was released and featured an “open ventral tab” that targeted for open ventral/incisional hernia repair. C-QUR RPM Mesh was released in April 2012 and featured reduced coating, mesh for open and laparoscopic repair; after approval, name changed to Mosaic. In October 2015, C-QUR Mosaic (open and laparoscopic repair), and C-Qur TacShield (for fixation guidance with large ventral hernias), were released. The intended use of the C-Qur products was as a tissue separating mesh. These products were intended to be implanted using theIPOM technique.

The Design of C-QUR 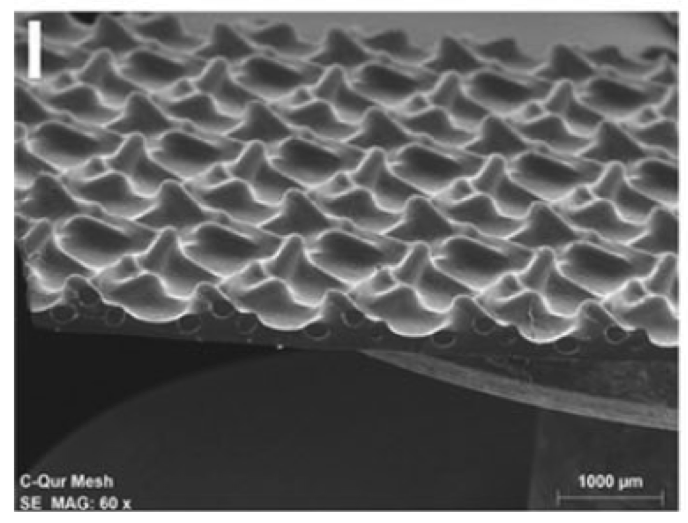 Marketing for C-QUR Mesh indicated that the coating on the polypropylene mesh somehow performs differently on each side of the mesh, but this sort of representation defies basic principles of biomaterials science. Physicians were told that the O3FA film reduces inflammation. In reality, however, the water-tight coating on the C-QUR Mesh prevents ingrowth, and can cause infection, pain and seroma. Patients have also developed abscesses and skin rashes and other allergic reactions, as well as bowel obstructions and adhesions.