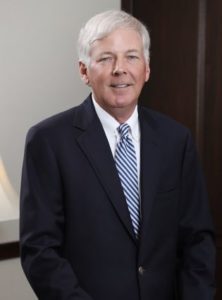 Drew was born in Charlotte, N.C. and moved to Georgia at an early age. Growing up in Lavonia, Franklin County, Drew’s father was a small-town, country lawyer in a general law practice, taking on any business that walked in the door. Drew formed his vision of having an impact on clients’ lives by observing his father’s handling of legal matters – “My father truly made a difference in the lives of our small town’s citizens of all races and stations in life, often taking little or no fee for his legal work. He also taught me that as an attorney, your word is your bond and never act such that your credibility is called into question.”

Drew attended the University of Georgia undergraduate and the University of Georgia School of Law, graduating with honors from both. For the majority of his early legal career he worked defending serious personal injury and death cases, employed at law firms representing all major liability insurance companies, doctors, hospitals and product manufacturers. Several years ago however his practice transitioned into a claimants or plaintiffs practice where he began representing those seriously injured or killed by the actions of others – vehicle drivers, trucking companies, doctors/hospitals, nursing homes, medical device and product manufacturers and large corporations.

Drew was elected a fellow in the American College of Trial Lawyers in 2007 (membership is limited to the top 1% of trial lawyers from each state) and is annually voted into the Best Lawyers in America, Georgia’s Super Lawyers, and the Top Lawyers in Georgia. He is also a member of the National Trial Lawyers Top 100 Trial Lawyers. He is AV-rated by Martindale-Hubbell, the highest possible peer review legal and ethical standards rating. He is a fellow of the Lawyers Foundation of Georgia and past president of the Western Circuit Bar Association.

Since Drew began representing individuals and families seriously injured or killed by the actions of others, he has successfully brought those matters to conclusion through settlements or jury trials resulting in multimillion-dollar recoveries. These include large recoveries against doctors, hospitals, trucking companies, other vehicle drivers, medical device manufacturers, premises owners, nursing homes, workers exposed to hazardous chemicals, automobile manufacturers, and other product manufacturers.