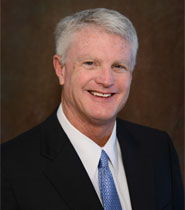 A native of Cordele, Georgia, Jim graduated from Crisp County High School and then attended Georgia Southern University on a baseball scholarship. In 1978, he was drafted into the professional ranks by the Atlanta Braves. After a minor league stint, Jim attended the University of Georgia Law School, graduating in 1983.

Jim has over 33 years experience as a trial lawyer. During the first part of his legal career he defended injury and death cases, including those involving large trucks, defective products, hospital and physician malpractice, tobacco products and asbestos products. He also defended companies in business lawsuits. In 1999 he switched sides, and now handles injury and death cases for plaintiffs, as well as plaintiff business litigation. Many of Jim’s clients are sent to him by former clients or other injury attorneys. Jim is an elected Fellow of the prestigious American College of Trial Lawyers, whose membership is limited to the top 1% of trial lawyers from each state. He has been voted to Best Lawyers in America for 20 consecutive years and designated a Legal Elite by Georgia Trend Magazine. Jim is AV rated by Martindale-Hubbell, the highest possible peer review rating available for both legal and ethical standards.

Until recently, Jim was a professional baseball scout for the St. Louis Cardinals. Before his scouting years, he was active as an amateur coach. He received the Honor Award from the American Baseball Coaches Association for contributions to amateur baseball. He has been married since 1983 to the former Lynn Bridges. Their son Walker is a CPA in Portland, Maine. Their son Charles is a lawyer at Hunton & Williams in Richmond, Virginia, and their daughter Mary attends law school at the University of Georgia. Jim enjoys all outdoor activities, such as fishing, hunting, golf, hiking and running. He is a trustee of the Georgia Southern University Foundation.

– A high school champion runner who had a below the knee amputation as a result of alleged physician malpractice (but later became a Paralympic sprint world champion)
– A 3 year old girl who sustained severe burns at a day care center when an older child threw a lit match which ignited her dress, which did not meet federal flammability rules for children’s clothes.
– The families of two railroad engineers who burned to death when their engine struck a gasoline tanker truck when it’s driver tried to beat the train at a railroad crossing.
– The family of a 40 year old mother who died as a result of an anesthesia mistake during routine outpatient arthroscopic shoulder surgery
– Workers exposed to hexavalent chromium who developed severe and disabling respiratory conditions
– A man who was badly burned over 70% of his body, including his face, when a Savannah sugar refinery exploded
– Women injured following surgeries for implantable plastic pelvic mesh devices
– A woman who underwent 8 surgeries over a 3 year period to remove parts of her intestines and infected tissue as a result of a defective implanted hernia mesh that broke and punctured her bowel
– A young woman who died following an airplane crash
– Hundreds of families of a rural town whose homes were contaminated with arsenic from a nearby pesticide plant.