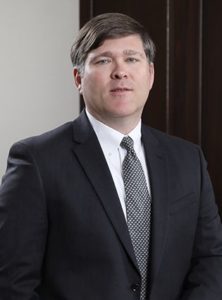 Josh was born in Gainesville, Georgia, on July 22, 1973. He grew up in Athens and earned his undergraduate and law degrees from the University of Georgia. He has been with BBGA since graduating from law school in 1998.

Josh says BBGA offers clients the benefits of a larger law firm without the “big firm” drawbacks: “We have the experience and resources necessary to handle most any case, but we are small enough to operate with efficiency and to provide real value for our clients.”
In his role with the firm, Josh helps clients and their families to recover compensation for the harm they have suffered as the result of the conduct of other individuals, professionals or corporations.
Since 2006, much of Josh’s practice has been devoted to seeking justice for patients from across the country who have been injured by defective surgical mesh devices. Josh was extensively involved in the Mentor ObTape Multidistrict Litigation (“MDL”), which included all federal cases in the country involving the ObTape mesh device sold by Mentor Corp., as well as the firm’s litigation involving another mesh device, the “IVS Tunneller” sold by Tyco Healthcare.

Since 2009, Josh has had significant involvement in the cases relating to the pelvic repair mesh devices sold by C.R. Bard, Inc. which were transferred to the Southern District of West Virginia in 2010.

In coordination with other law firms with whom we are working in this litigation, Josh prepared the motions seeking transfer of all federal cases involving the pelvic repair products sold by American Medical Systems, and Boston Scientific to the Southern District of West Virginia, which were granted in February 2012. Since then, three other MDLs have been transferred to Judge Goodwin involving three additional manufacturers (Coloplast, Cook and Neomedic). These MDLs have included more than 100,000 cases.

In April 2012, Josh was appointed by MDL Judge Joseph R. Goodwin of the Southern District of West Virginia to the Plaintiffs’ Steering Committee for each of the pelvic repair product MDL’s. Josh and the firm have coordinated with lawyers from around the country to work toward a successful resolution of this national litigation.

More recently, Josh and BBGA have been involved in national litigation involving defective hernia mesh products. BBGA is actively involved in the leadership of the coordinated state court litigation involving the Atrium C-Qur devices in New Hampshire, and are pursuing claims on behalf of individuals who were injured by defective hernia mesh devices sold by C.R. Bard, Inc.

In addition to their pelvic and hernia mesh work, Josh and the firm also represent clients who have suffered injury from defective products and medical devices, including Inferior Vena Cava (IVC) filters and Johnson & Johnson talcum powder products.

Josh is an experienced writer on a variety of legal issues. He has briefed or argued numerous motions before state and federal courts throughout Georgia and in the Federal District Court for the Southern District of West Virginia. Josh has briefed appeals in the Georgia Court of Appeals, Georgia Supreme Court, U.S. Court of Appeals for the Fourth Circuit, and the U.S. Court of Appeals for the Eleventh Circuit, and he has argued appeals before the Georgia Court of Appeals, Georgia Supreme Court and the Eleventh Circuit. Staying abreast of developments in the law, and being prepared to address the complicated legal issues that arise in complex national product liability litigation allows BBGA to stand toe-to-toe with the nation’s largest corporations and corporate defense law firms.

Outside of work, Josh enjoys spending time with his wife and his daughters, as well as cheering for the Georgia Bulldogs.