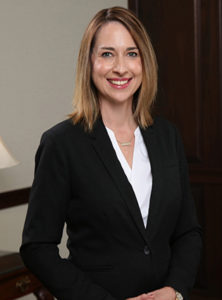 Leanna Pittard was drawn to the practice of law by the “opportunity to help people in a meaningful way.” As an attorney with Blasingame, Burch, Garrard & Ashley, P.C., she has seized that opportunity by focusing on the representation of clients who have been harmed by defective products. Leanna, along with a team of paralegals and legal assistants, is primarily responsible for gathering evidence and information from clients and then producing that information to the opposing party. In the mass tort arena, this can mean handling large volumes of documents and information. It also means that Leanna spends a good deal of her day speaking to clients, which is her favorite part of her job as an attorney. She focuses her practice on cases involving defective or dangerous products. With nearly twenty years of experience litigating dangerous products, Leanna finds passion and purpose in keeping these defective and dangerous products out of the hands of consumers.

Her undergraduate degree is in psychology, so she clearly has an interest in listening to others and doing what she can to help them. She often has clients who really need to tell their story; they need the closure that comes from talking to a sympathetic ear who understands how they are suffering. The satisfying thing about practicing law for Leanna is that not only can she listen to her clients’ stories, but she can help them navigate the legal system and do what she can to make them whole again.

Since 2005, Leanna has made a personal commitment to engage in 40-60 hours of hands-on volunteer service each year, to the benefit of her community, her church, and her children’s schools. To that end, she has worked as a tutor and mentor at three shelters for homeless and abused children; helped build a garden and host an egg hunt at a school for deaf and blind children; helped lead a minority Girl Scout troop; prepared income tax returns for low-income families; helped host a book drive for children and schools in need; assisted with the planning, hosting, set-up and/or clean-up of a chili cook-off, a Cajun cook-off, a gala, a cocktail party, several holiday markets, a plant sale, a ballet, an art show, a food truck event, several silent auctions, and many other community fundraisers. At church, Leanna has volunteered as a lector, an altar sodality officer, a Sunday school teacher, a Vacation Bible School volunteer, and recently, the co-founder of a new ministry for mothers of young children. At her children’s schools, she is a room parent and a member of the Parent-Teacher Organization. She was recently asked to become a member of the inaugural Alumni Board at her alma mater, Birmingham-Southern College.

Leanna was born in Mobile, Alabama, and has worked remotely for the firm from Birmingham, Alabama since 2011. Leanna now practices out of the newly established Birmingham office, located at 2100 Southbridge Parkway, since 2021. She and her husband share a passion for travel and their two little girls.